Costas Varotsos was appointed professor of Visual Arts at the Aristotle University in the School of Architecture in 1999. He represented Greece at the Sao Paulo Biennale in 1987 and the Venice Biennale in 1999.He was participated at the Venice Biennale with the Italian pavilion twice in 1992 and 1995 and in the International Biennale of Los Angeles in 1999. He has presented works with a number of exhibitions in Greece and abroad. His works are in public places in Greece, Cyprus, Italy, USA and Switzerland. He has received the “Street Trend award 2004/2005”, for his work “Untitled 2001” in Switzerland. and a prize for the best sculpture from the “Year in Review 2004” for his work “Communicating vessels” in Palm Beach, Florida in the USA. In 2007 he received the award of sculpture “Segno d 'Oro” for his overall artistic offer in Italy and has received honorary distinction from the President of the Italian Republic. (Cavaliere dell' Ordine della Stella della Solidarieta 'Italiana 2004)


Creating between space and time 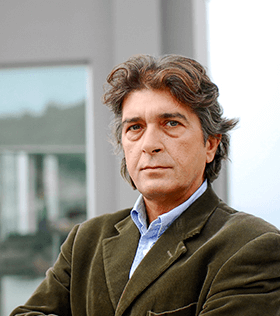